Hay fever or allergic rhinitis is an allergy that mainly affects the nose. It can occur at any time of the year, but it is more prevalent during warm summer months when outdoor plants release tiny pollen particles in the air to fertilize other plants. The symptoms of hay fever include frequent sneezing, a clogged and/or runny nose, watery eyes, and headaches. A person stricken with the allergy can experience itchiness in the ears, nose, and throat, as well. 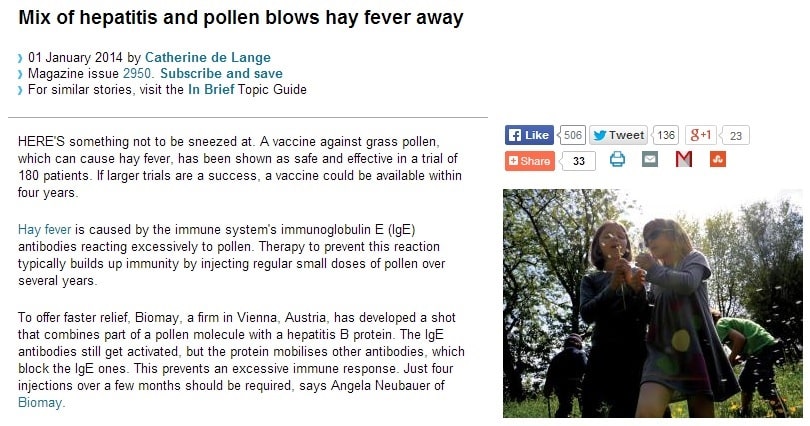 One particular study is trying to develop an effective vaccine against hay fever. The New Scientist website provides information on this development:

HERE’S something not to be sneezed at. A vaccine against grass pollen, which can cause hay fever, has been shown as safe and effective in a trial of 180 patients. If larger trials are a success, a vaccine could be available within four years.

To offer faster relief, Biomay, a firm in Vienna, Austria, has developed a shot that combines part of a pollen molecule with a hepatitis B protein. The IgE antibodies still get activated, but the protein mobilises other antibodies, which block the IgE ones. This prevents an excessive immune response. Just four injections over a few months should be required, says Angela Neubauer of Biomay.

Although the vaccine isn’t expected to be available to the public for at least a few more years, you don’t have to wait that long to have your child treated for hay fever. Current treatments for the condition include decongestants, antihistamines, and steroid nasal sprays. Take your child to a good Westminster, CO pediatrics center like Indian Crest Pediatrics so he or she can receive the proper treatment that will relieve him of the discomforts brought by hay fever.

If the symptoms can’t be managed with medicines, your child might have to undergo immunotherapy, which can help desensitize him or her to allergens. Immunotherapy can be obtained from an allergist or immunologist. Your Westminster pediatrician can recommend a good one for you to visit once he or she determines that immunotherapy is necessary for your child.