September saw a greater number of respiratory illnesses among Colorado children than what most health experts have anticipated, by at least 15 percent higher than last year. According to The Denver Post, the increase is partly attributed to the spread of the extremely rare enterovirus 68, which causes flu-like symptoms and breathing problems among children. Dr. Monica Federico, pediatric lung specialist at Children’s Hospital Colorado, said that parents must protect their kids from illnesses the might encounter this school season; particularly asthma:

The presumption is that children reunited with their classmates in close quarters in classrooms are exposed to more germs and colds, which can trigger asthma attacks. Late-summer allergens, such as ragweed, might trigger asthma attacks, as about 80 percent to 90 percent of pediatric asthma is triggered by allergies, Federico said.

And, going back to school means parents aren’t around to keep a watchful eye on children’s use of their puffers – the dose-metered inhalers used to take asthma medicine, the corticosteroids that reduce the inflammation of airways. 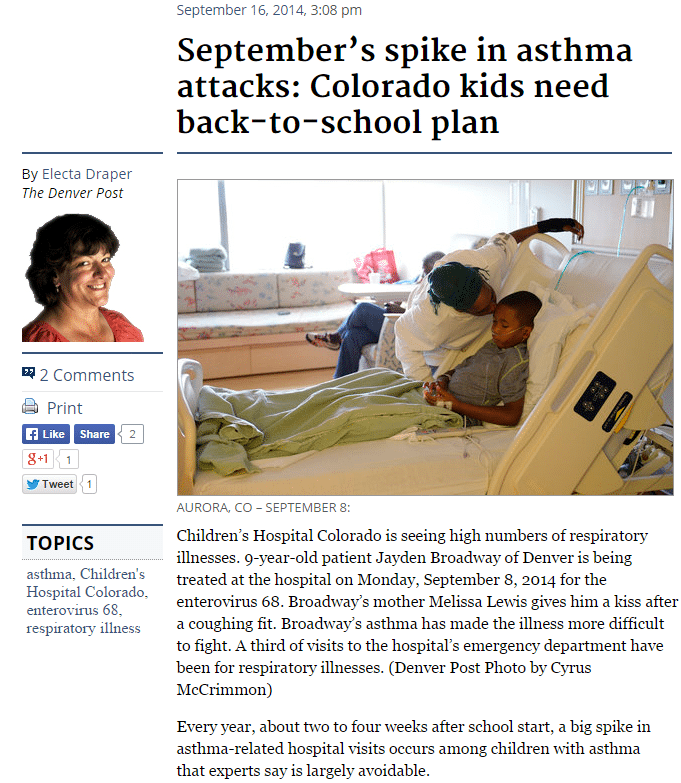 The state is no stranger to this disease as approximately 9.1 percent of all children in Colorado have asthma, which is slightly higher than the national average of 8.9 percent. In addition, about 40 percent of children miss one school day every year, which translates to about 500,000 missed schooldays in total. While there is no cure for asthma, it can be overcome with the help of a pediatrician in Westminster, like Dr. John Barbe of Indian Crest Pediatrics, and other health experts. In particular, a pediatrician can assess the severity of a child’s asthma before recommending a specific form of treatment.

As Federico says, allergic asthma is the most common form of the illness among kids. Though inhaling certain amounts of corticosteroids is known to address the symptoms of this asthma, it’s much better for children to simply avoid exposure to allergens in the first place. Exercise-induced asthma, on the other hand, is less common yet can also prevent children from engaging in sports and other physical activities. This type of asthma can be controlled by inhaling broncodilator medication at least 15 minutes before exercising.

Meanwhile, a severe form of asthma known as status asthmaticus, almost always requires emergency medical attention. Asthma of this sort is characterized by breathlessness (even when lying down), speech difficulties, and tightness in the chest, similar to what some kids in Colorado felt when they were exposed to enterovirus 68. Parents can count on pediatrics in Westminster, which includes consultation and medication, to lend a hand.